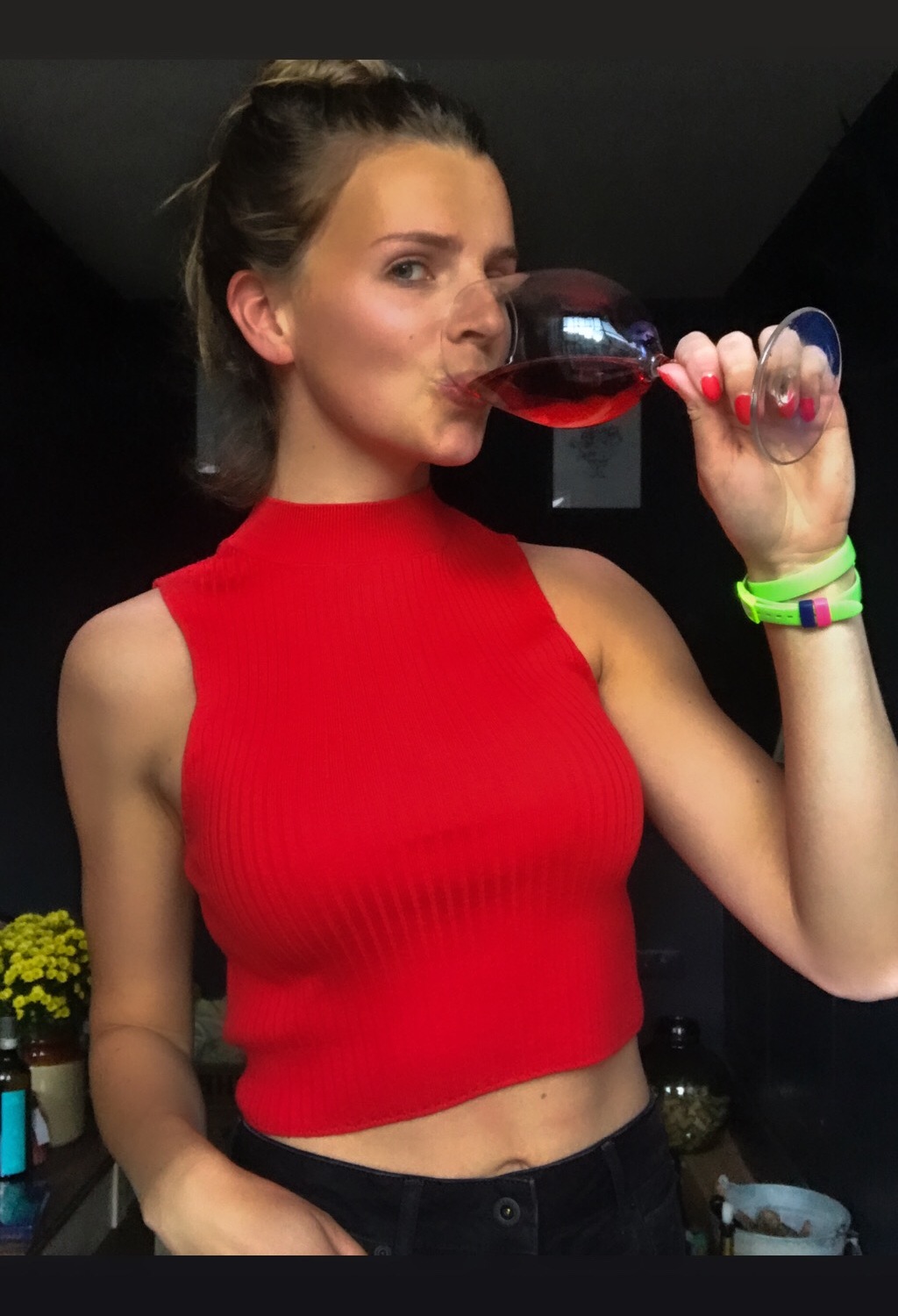 Do you know what gets me excited? A wine that I taste, mull over, tell friends about and then when I come to research it, there’s little to no information about it on the old world wide web.

It’s usually because that wine has come from an independent retailer who’s importing from several wineries they’ve sought out themselves. This, amongst other things, guarantees quality in my opinion. These individuals aren’t just going to wine fairs and buying what they’re told is popular, they’ve actually visited the vineyard, met the wine makers and thought, I’d like to sell this product. This is why you must try and support independent retailers over supermarkets when you can people.

But before I get into more of that, I’d like to talk about organic wine. Because, I still think a lot of people, especially your average supermarket wine buyer, don’t really understand organic wine, I know I struggle with it. From a farming point of view, I quote a farmer friend of mine, Will, who said “organic farming means half the yield for twice the price!” Which isn’t wholly reflected in wines yet. Will went on to say, “It’s far more labour intensive than conventional farming. Wheat wise, instead of spraying 4/5 times you will have to harrow the crop 8-10 times to control weeds…” and so it goes on.

As a consumer, why should we bother buying organic wine you might add. Well, either because you want to support people who are trying to help the environment or simply, you care about your health. Pesticide residue isn’t exactly part of our 5 a day (wine is) so if you can still enjoy really good wine and avoid it, why wouldn’t you buy organic? And, side note, grapes are one of the fruits with the highest level of pesticide residues

For something to be called organic, it simply needs to be created from organic raw ingredients. So where wine is concerned, the grapes in the wine need to be from a certified organic vineyard. But here’s where it gets confusing;

USA: “a wine made from organically grown grapes without added sulfites”

EUROPE & CANADA: “a wine made from organically grown grapes that may contain added sulfites”

Despite all of this, what Will said and what organic actually means is quite significant when it comes to the Italian wines that I’ve been drinking lately. They aren’t certified, but they’re organic. This is because the producer rightly said, ‘how can it be organic with all of the tractor fumes polluting everything!’ I can see their point… Certification also means that you can’t save a bad harvest if something does go wrong, you obviously have quite a bit more free rein without it.

The wine in question is from a supplier called Jackson & Seddon who I discovered on Instagram. Entirely run by a chap called Rob Seddon and his fantastic pooch Jackson; from the picking of the wines to the boxing them up and sending them out for delivery. Interesting wines and a dog, I was keen to learn more!

Rob worked in Telecoms many moons ago as a Client Manager. This was until he went through a traumatic and stressful period of his life, sought the help of a therapist who thankfully helped him see the light and so he decided to quit. Note to anyone reading this, it’s ok to quit, it’s ok to ask for help and talking to people is one of the most important things you should do! As life handed Rob countless lemons he settled into the happy environment of his local wine shop in Buckinghamshire and worked there for a short period of his life.

This was a hint of what was to come and after an interesting few years working alongside passionate people in the wine and hotel industry, Rob found himself in Scotland, single and not sure what to do next. That’s when he saw an advert on Facebook for a BBC 2 TV show called Second Chance Summer, a seven week adventure on a farm in Tuscany where the wine journey I suppose you could say climaxed. Here, Rob decided wine was going to be his future and crowdfunded to start his own business. Two years in, Rob has established Jackson & Seddon without sacrificing on wine quality or giving into wine fads or becoming a wine bore. It is just simply great and interesting wines from family run vineyards and people who like to get their hands dirty.

I’m trying to keep this blog post short after the last monster so before I get carried away…here are the wines I have tried thus far:

I went to a Brunello D’Montalcino wine tasting at Hambleton Hall last year and learnt all about the highly regarded Sangiovese grape. I never actually bought any of the wines because I only liked one enough to want it at home and it was a little out of reach. I’m so happy this wine came into my life. It’s pure gold, well it’s not actually it’s a lovely ruby but what an exceptional wine. It’s so ripe, but not at all jammy thanks to the climate. Deliciously gentle, not for people who like to suffer for their wine. Rounded tannins, I had nearly the entire bottle with some truffle gouda, a winning accompaniment.

I remember this wine like it was yesterday. It was a gorgeous British summer day, my sister was home and I’d been to pick up my parcel earlier that day. Patience is not one of my virtues and I’d opened that box more excited than a pensioner on a Friday. This wine spoke to me, it said, “drink me now” and so I slid it into the wine compartment of the fridge while mum prepared some sort of salad for lunch. Sharing wine also isn’t part of who I am but I thought I’d treat my closest relations to a drop.

It was the first Jackson & Seddon wine I was to taste and they are probably the toughest critics I know. “It’s not that cold yet sorry,” I said as I slid Harry and Mum a glass. “Oh but it’s just delicious,” they replied. A pensive few moments later and Harry announced, “I’d say melon,” in a peculiar accent. I’m still not sure whether she was talking about the wine but I am all for encouraging absolutely anyone to give me their opinion be it as specific as melon or not. It has a very well-balanced acidity, medium verging on high. A lemon straw colour, lovely nose of honey, quite floral but not sweet or cloying. Wonderful minerality and complexity on the palate, great length, lingers for the rest of the day. Leaves you wanting much more.

I have mentioned many a time in the past that a shit wine can be a great wine if you’re drinking it in a great place, have I not? Was the wine good…or did you just drink it with people you love overlooking one of the best views in the world. It’s an inaccurate way to review a wine. So, responsible person that I am, I took this particular rose to a friends to babysit with. If a wine tastes good while looking after three (albeit wonderful) hyper, very hyper giggling children under ten years old then you know it’s good.

I even roped in Heston’s photography (Heston is 8) skills, he has an eye for what’s good and he did a great job. In hindsight I should have given him something to stand on:

As you may have guessed from the labelling this is 100% Sangiovese too, but a rose this time. Only a little stint with the skins to keep things pale and snazzy but what a joy to drink on a warm evening. Heston wasn’t sure on the smell, but he did say strawberries which was spot on. It wasn’t sickly sweet or anything near to drink though, very refreshing indeed. Very balanced, an ‘all-dayer’ in the sunshine sort of wine.

But if only you’d try it. No, I don’t like rose’s that colour. And so she wrapped it in paper and poured it into an opaque glass, blind folded her guests and demanded they give their unbiased opinions. Oh rose, what have we done to you. Unless you bear the name provincial we won’t even look at you, unless you’re paler than the most salmon hues of pink we won’t discuss you, what products of marketing we have become.

Rob told me I had to try this, he said it wasn’t sweet, it was delicious and I believed him. I don’t know what has happened to us but I’m going to just blame Blossom Hill. What trust issues we have, how dare that wine share 6 hours of passion with the skins, what blasphemy. And yet, there isn’t a hint of sweetness, we judge without the full story. This is no ordinary wine. At 50% Syrah and 50% Sangiovese, why wouldn’t I love it? And I do, I truly truly love it. The Mediterranean climate serves it well, such minerality, then black pepper, spicy, like my favourite soap from Molton Brown, Pink Pepper, it’s intoxicating. It’s my new favourite party wine, I’ll show em, I think, never judge a wine by it’s colour. It would be perfect for fish, or pizza or perhaps a picnic…

How could I forget, not a single one of Jackson & Seddon’s wines have given me a hangover, a headache, or anything of the sort. Could it be because they’re organic? Who knows. Good wines, good deed, good thoughts.

One thought on “Italian Organic Wine”