As you can probably tell, I fully embraced Dry January, it was a really tough month what with Hambleton Hall, London, A Wine Tasting,  and of course the incredible ski trip to Tignes. We’re now in #Februdairy which I’m really enjoying, however, what’s this, the 16th February already? Lent has really snuck up on me this time and I just don’t know if I can take anymore of this synchronised abstemiousness. So, instead of doing something that would impact other people like giving up chocolate or biscuits (because I’m afraid I would turn into a thin and horrible person), I thought I’d just not buy any bottled drinks this month. A small step to cutting down the plastics in my life, because we’re all for sustainability aren’t we.

Talking about sustainability, I bought a couple of breaded plaice fillets from Waitrose the other night because I thought I’d do the right thing and not eat from the depleted stocks of Cod for once. I’m afraid the Cod will no longer be replaiced (sorry) by this very fishy and disappointing alternative, but at least I tried, never again. I will also be telling people who give me a straw that they need to rethink their values, and where I can, I shall avoid unnecessary plastic waste, even if it means temporarily borrowing shopping baskets from Waitrose when I forget my bag of a lifetime. Lent is a long 40 days (and 40 nights) which means that hopefully my new consciously-plastic-dodging-life will stick after Easter, and maybe even inspire a few others to do the same.

Wine bottles are nice aren’t they, usually glass, probably never recycled but it’s reassuring to think they might be and at least they’re not plastic. If I get a particularly pretty bottle I usually keep it to one side and it becomes a candle holder, I think that’s called upcycling isn’t it? I currently have an alarming number of bottles sat on my coffee table, waiting for their inevitable end in the back of a bin lorry. They have a pleasant life currently, they were tried by a number of people on Saturday night and ever since they’ve been in full view of anyone passing my living room windows. I like to think they jump straight to the conclusion that I’m a raving alcoholic, who sits at home with a sausage dog on my lap all day, writing nonsense while sipping at various Chateau’s, they wouldn’t be too far from the truth.

Fortunately, I was not alone when it came to the consumption of six bottles of wines from 3D Wines, a wine company with a difference in North Lincolnshire. These guys are offering something a little bit different with their membership which makes the whole experience more realistic. Essentially, by joining 3D Wines you become a vineyard partner and you will own a little piece of a working, traditional vineyard while tasting all of the wine in the comfort of your own home.

The decision to taste the wines I’d ordered over an actual wine tasting style evening was to give more of a diverse opinion on the wines, rather than just my palate, and it made all the difference. There were ten of us in total, some white lovers, some gin lovers, but mostly a collaborative of people who enjoyed a tipple or two. A lot of the couples hadn’t actually met before, so it was all quite quiet at the start of the evening. I’d go so far as to say people were quite shy to give their opinion, but by the second top up of the next wine, things started getting a bit more rowdy.

Thing I have learned for next time:

Here’s what we tried:

This was definitely everyone’s favourite.

What 3D Wines say: “This was the vintage that the Beaujolais winemakers dream of. Although the quantity is not as great as they would have hoped for, the quality is exceptional, top to bottom. Cooler nights and a few showers in August helped maintain freshness and balance. Harvest towards the end of that month was a joyful occasion with the early ferments showing incredibly deep colours and lush, fruity flavours.”

What we said: It was definitely lush, fruity and well-balanced. It’s a deep ruby red with plenty of plummy flavours. Plus it leaves a really long and delicious after taste.

This wasn’t everyone’s cup of tea, but a few people loved the richness of this red.

What 3D Wines say: “Bernard and Thomas describe your exclusive Morgon as a ‘very pleasurable wine from an exceptional vintage. Although it was a very small crop, the small grapes were full of flavour. We think we have captured them in bottle perfectly.'”

What we said: This red wine is quite dry, verging on bitter. However, on the other side of this there is plenty of ripe fruit, it’s a robust wine!

Another quite powerful red, this wine was definitely favoured by people who prefer those oaky type flavours.

What 3D Wines say: This wine comes from old Gamay vines, averaging mroe than 50 years old, situated in a small vineyard plot at the foot of the windmill (Moulin). The 2015 is richly endowed with intense aromas of morello cherry, damson and iris.

What we said: Now I don’t know if you’ve ever tried a damson but they’re quite sharp. Some people liked this but for others it was a bit too much, and similarly to when you eat hedgerow fruits such as sloes and damsons, you’re left with a slightly filmy tongue. After a second glass however this wine really developed, so it would help to aerate it before drinking in the future.

A New Zealand Sauvignon Blanc, you’d be travelling a long way to visit your patch of vineyard but I think it would be a fantastic trip after reading about winemakers Greg, Amanda and Samantha Day and how they run Kahurangi Estate. They also focus heavily on sustainability when producing their wines, something we all need to do.

What 3D Wines say: It was a slightly cooler, windier summer than normal, resulting in later picking. This wine should show excellent ripeness with passion fruit flavours and a touch of Nelson zinginess.

What we said: Definitely zingy, with some people liking this tantalising taste and others, not so much. But that’s why it’s great to have so many people trying the wines, the white wine drinkers absolutely loved this Sauvignon Blanc.

This was probably the most talked about wine of the evening because of the totally opposing views.

What 3D Wines say: Vintages like 2015 don’t come along too often. This hot, sunny vintage has bestowed generosity and richness on the white wines from the region. Your Côte de Nuits-Villages is one of 3D Wines Partners’ most popular white burgundies. Its rich flavours counterbalanced by fine lemony acidity and minerality will wow vineyard Partners once again.

What we said: This wine is quite harsh on the nose to people that don’t like this sort of thing…I think most people agreed it smelt of burnt rubber. However, upon tasting the wine, it is probably the most complex of the bunch (for me anyway.) It’s almost malt-like it how smooth it is, with notes of honey, scotch and jasmine. For people that don’t like these oaky, rich white wines it’s a bit like rocket fuel. For me though, a cracking white burgundy.

We also had The Wine Society’s Albariño D.O. Rias Baixas 2013, and the Stamford Wine Bar’s Syrah which is from Gérard Bertrand, Naturalys 2016, both of which were interesting wines to try and probably deserve individual reviews. There were a number of other bottles too…but somehow the wine just kept disappearing!

And the flowers were arranged by my lovely sister Harriet! 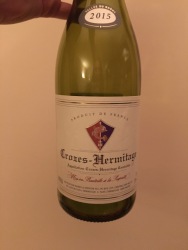 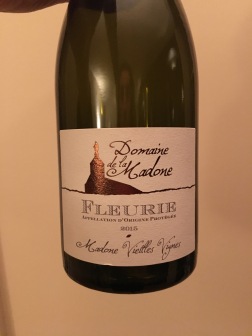 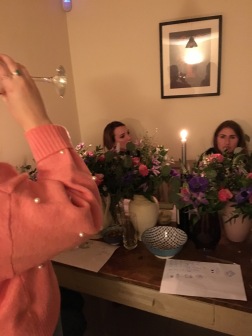 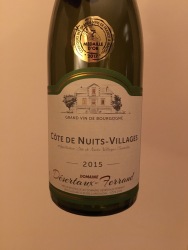