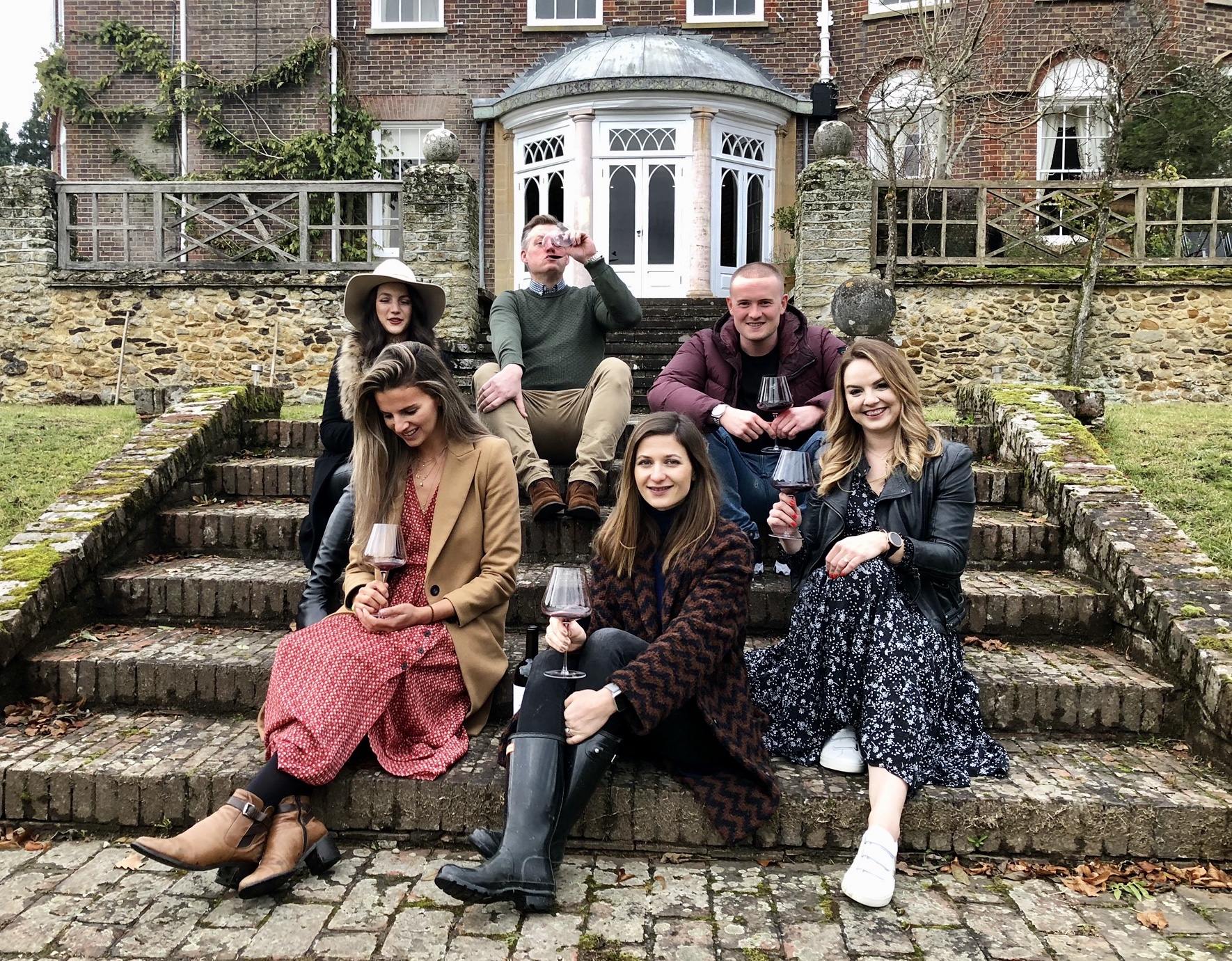 How times have changed. Growing up, just like everyone else, I was told to never talk to strangers. There was a tale that went around school at the time, I’m still not sure if it was true, about two sisters who went missing when they were walking home from school. The story goes that a couple pulled the car over and asked if they wanted to see their puppies, the young girls said of course and they were never seen again. And, although I may be older and wiser, I can’t guarantee that I wouldn’t jump in someone’s car if they promised to show me their impressive wine collection, but I’ve made it this far in life relatively unscathed.

Then along came social media. Yesterday, I got into a car with a man I’d never met before, in a place I’d never been to. Cat-fishing wasn’t even an option as I’d never even seen his face until that very moment. However ominous this may sound, the friendships built between communities on social media these days, particularly Instagram, make these some of the best meetings. This isn’t the first time I’ve spoken about how much I love the app for the way it builds friendships. I met Tatiana, Effi and Agatha through this medium too, I wrote about it here.

The car belonged to someone I knew as @wordonthegrapevine – a highly informative Instagram page with some great content and shiny bright photos of wine that makes you go ‘Mmm yes please.’ His name is actually Josh and Tatiana reached out to him sometime before Sunday’s events. They’ve been to the Mosel together before on one of the Diploma visits as they share a love of Riesling. I also finally got to meet Daphne off of @toro_tries_wine – a very funny page, Daphne is a real character who takes some cracking photos. And, the ever supportive and knowledgeable @thegrapewizard – a chap called Jason Davies who offers some great advice and knowledge on Instagram.

Tatiana (@tatianalivesey) was hosting the event with PerUs as she is now a Brand Ambassador for them which is really exciting. There were also two fabulous American girls hosting, Katya Kurkbek (@katyakurtbekwine) and Marisa Costa (@marisagoesglobal).

We were welcomed into Tatiana’s bustling Surrey home with a glass of the Sauvignon Blanc. I was over the moon to see Tatiana’s twins were still in residence, one armed with the metal lid of a bin like a little roman soldier, only more frightening, and the other testing the foundations of his impressive sofa den. Another angelic faced little human appeared intermittently, Tatiana’s daughter, and after a few introductions and goodbyes the beautiful chaos was whisked away to London with Daddy.

Back to the Sauvignon Blanc, a cloudy bright straw coloured liquid wafting all sorts of fascinating aromas from the exquisitely elegant hand blown Sophienwald glass. I don’t know about you, but I’m a sucker for a branded wine glass. I think it adds something to a private event, whether it’s PerUs or the joyous little goose on Gusbourne Estate’s glasses, I’m there for it. It feels cruel telling you about the depth and complexity of this white wine, for it is sold out. But, you never know when you might get the opportunity to try some, and maybe it will just give you an introduction to what sort of brand we’re dealing with here.

Described as ‘Sunshine in a Glass’ by the winemaker Russell Bevan, this wine was created ‘as a tribute to a woman who brought sunshine into all of our lives and carried through life with a presence both elegant and bold.’
It’s a supremely interesting wine, it’s unfiltered which obviously makes it a little cloudy. But there’s none of that wild funk you could be apprehensive about on first looks. It’s a big mouthful, it feels like a red wine, it actually has body. But, it’s sharpened Sauvignon Blanc, there’s flinty matchstick notes, gooseberry, some ashy notes, minerality. It’s so interesting that it’s addictive, you want to keep going back again to try and decipher this wine. We had it by itself and then with a scallop starter which was a perfect pairing.

Conversation turned to politics, Trump, Corbyn, Johnson, I think Daphne said something along the lines of feeling ‘Politically Homeless’ at the moment, which really hit the nail on the head. We agreed things are a bit shit, but it’s important to vote and we moved on. It’s one of the most comfortable political conversations I’ve actually ever had.

This is 80% Cabernet Sauvignon and 20% Merlot and boy is it juicy. I have just read an article on Tim Atkin’s website about what makes a wine taste expensive these days. There is definitely something about the cleanness of the fruit in the PerUs wines that makes them taste a little bit extra. All this fruit sometimes conjures an olfactory memory of walking round a Damien Hirst exhibition, it’s not a bad memory and it reminds me of creative excellence. The more I think about Bryn the more I’d like some more, it’s just so playful and abundantly juicy.

Tatiana suddenly appeared with quarter of a cow on an sturdy wooden chopping board. I have never seen such an enormous rib of beef, it was straight out of a Tudor scene minus Henry VIII. Pink in the middle with fat that had sort of caramelised and gone all delicate, it looked like it had been painted on. We really questioned how vegans turn it down. Is there anything better than a roast with all the trimmings? I love meat but I absolutely buzz off vegetables and we were given proper carrots. You know the ones I mean, they actually taste like they’re out of the ground, some soil remaining. Red cabbage, Yorkshire puddings, roast potatoes, creamed spinach and gravy, a Sunday done right.

This wine showcases two quite different sites. Russell is working with the mountain fruit from Sage Ridge vineyard which sits at 1200ft elevation. This is what gives the concentrated intensity to the wine. I picture it as grapes that are suffocating a little bit, and we all know the best grapes are the ones that have struggled. Then the valley floor of Tench Vineyard provides it’s offering to tame the regimented mountain fruit. The tannins are fine grain with an extraordinary length, caudalies for days. I think 100 cases were produced. Your beauty is beyond compare Janeen.

Never have I ever had a red wine that loves chocolate as much as Armaan. The Rock of wines, this is described as the ‘800 pound Gorilla’ of the collection by PerUs. We were wandering around the gardens for a while sipping, snapping photos, taking in the expansive view of the Surrey Hills and the wine got cold. As we made our way back in, it developed with the temperature of the room, so many different notes all in perfect harmony with each other. A symphony of Russell’s passion and expertise swirling around a glass.

When I say chocolate…I mean chocolate. For pudding we had this bowl of chocolatey goodness. A tart surrounded by blueberries, strawberries and more chocolate, absolutely delicious.

They say that wine adds a smile to friendship and a spark to love. Well, I think wine also creates friendships. PerUs was significant because the foundations that this company are built on are all inclusive, it’s like a big family, a celebration of souls. The winemaker too is interesting. Russell Bevan started out writing, he’d write for one paper, then he’d write for two and suddenly he was writing for everyone. He was constantly meeting winemakers and oenophiles alike to interview and interrogate them for their secrets and knowledge. Tatiana describes him as meticulous and Katya described him as an artist. He locks himself away for hours on end, blending to the smallest hair on his nostrils until he is totally satisfied with the results. Of course, I doubt any winemakers release something they aren’t totally satisfied with. But for people who have met Russell, they seem captivated by his approach.

In an interview with Palate Exposure, Russell was asked, ‘What is the one thing you want people to remember about your wine?’ His response: It was serious and yummy. It certainly was.

One thought on “PerUs with Friends”