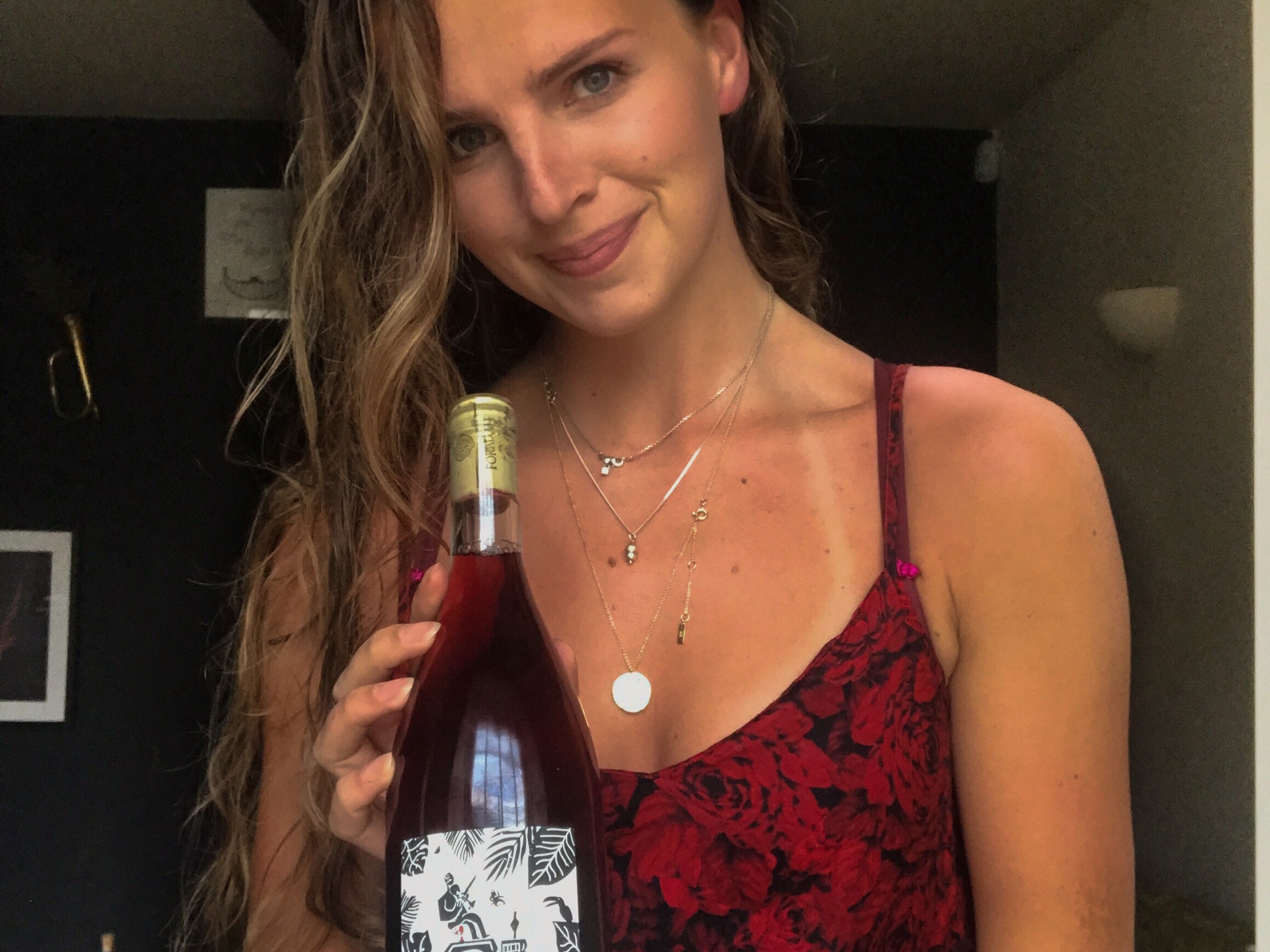 Is there a type of writers block where you write several blog posts on passionate wine topics ‘with an angle‘ before scrapping them and starting again? You see, I half gave into the angst on Twitter lately that wine writers don’t do enough drafts, don’t get proper criticism and they just don’t write with an angle. Jamie Goode always has a lot to say on the topic and as a well-respected journalist in the wine world, I thought I should listen.

So I’ve spent the last week or so researching female winemakers against male winemakers to see if there’s any real difference. It’s a topic that raises its head occasionally. For instance, I was chatting to Philip Amps from Amps Fine Wines about Dark Horse Chardonnay and I mentioned that it was the product of a magnificent woman called Beth Liston. Beth is on a campaign to product impressive wines for a tighter budget, she’s doing great. Philip asked me if I’d noticed a difference when I’ve had wines produced by female winemakers and I said I probably hadn’t tried enough consciously to decide. However, for him, there was a definitely something that made women stand out. So I researched and I researched and I decided it was bollocks.

My favourite summary on the topic comes from Jancis Robinson:

Some people claim that wines made by women have a perceptible suppleness and subtleness about them. One can certainly think of examples. Vanya Cullen’s Margaret River Cabernet Merlot from Western Australia and Veronique Drouhin’s soft Pinots from Oregon spring most readily to my mind. But hold on a minute. How about Helen Turley’s megawines or Delia Viader’s feisty reds?

And so instead, I thought I’d stick to my algorithm that according to Google, is working, and talk to you about wine as I experience it.

It begins in Paris…

I went a wandering in gay Paree and when it was finally an acceptable time to start drinking (12pm) I wandered some more until my slightly grubby Superga’s escorted me into Willi’s wine bar. It was only I and another and it was clear he didn’t stick to my midday rule. And then this extraordinary gentleman appeared behind the bar. Now, if you were to picture a dapper English chap who has had far too much fun in his life, a dog as a humble companion and chosen Paris over England, you’d picture Mark Williamson. I don’t think I have ever heard someone speak such fluent French in such a British accent until I met Mark.

Here, my timings must me slightly off as they were no longer serving food, perhaps we can forgive the man in the suit after all. I was handed a wine list and I studied it for some time while Mark prepared me the most delightful little cheese board. I chose the Etna Rosso.

By the way, Willi, is the dog.

Wonderful little wine this, so plummy and with that delicious verging on oxidised dried fruit flavour to it. It says Burgundian style online which is a lazy description, this wine deserves individual recognition for it’s own style. As you have probably worked out it’s from Sicily and it’s 100% Nerello Mascalese at 13.5%.

There’s something to do with it’s survival on Mount Etna and the wallpaper printed on the label and the pure colour of this wine that made me a little emotional. It’s defiant and beautiful, it’s not Burgundian at all.

I really wanted another glass of this beautiful wine but I thought I MUST try something different, for the cause. Mark noticed my empty wine glass and by this point, we’d attracted two more couples to the bar who were keen to work their way through the wine list as well. “Would you like a glass of something else, something strange like that,” he asked, that twinkle in his eye glowing ever the more brighter.

Interestingly, the curiosity for Mark’s wines was contagious. The new couples, one Russian/Dutch and the other British/American had started to navigate their way through the wine list, devouring everything in their path and demanding you try their wine next for it was amazing. It’s only when you’re in too deep that you realise there are no bad wines in Willi’s Wine Bar.

Mon Dieu! The Napoleonic posture of Mark Williamson with my second wine in hand.

A spicy dark fruited wine, makes me dribble a little just thinking about it. Which is a sign that it is high in acidity! A Grenache, Syrah blend, it’s everything you’d expect from those boisterous grapes really. Full-bodied, great tannins, long finish, confident wine. 15%, I’m sure it would age well if left but I challenge anyone to leave it alone.

After this I think I tried the 2017 Premier Cru Chablis from Vau de Vay thanks to the recommendation from Lidia, the Russian. It was Lidia who held us all in suspense at the bar for a few moments to do one of the most entertaining and fascinating toasts. She spoke of the Greek gods, Aphrodite’s desire to have a pearl necklace assembled from the salts of the most beautiful people in the world. The tragedy as the necklace was taken from her by a seagull and as he flew away, the pearls dropped and it just so happened that seven of them ended up in Willi’s wine bar. Cheers!

Thanks to my inner wine compass (and Nick Lander & Jancis’ website and Clement) I have found a whole new varietal that I think I love. But we aren’t always lucky enough to have these sorts of experiences, sometimes we just have to take the plunge and buy wine that we really don’t know if we’re going to like. Here, I have some suggestions for you if you’d like to broaden your wine horizons. They aren’t shockingly different but they’re definitely not run of the mill.

You can buy this very interesting wine from Pull the Cork for under £20 which is only 1/4 a tank of diesel and will bring you so much more joy. Created by the genius Elisabetta Foradori this wine is a good outcome from a somewhat terrible season. Using grapes that were affected by unusual hail storms, Elisabetta crafted this beautiful 100% Teroldego wine. They say Trentino in Alto Adige is an up and coming region and I’d say this wine is proof of that.

Tasting notes: first of all, serve chilled for ample fruits. Expect red fruits at their most perfect stage in the ripening process. A minerality so pure you can almost feel the hail melting upon your tongue like those weird ice creams you used to be able to buy, you know the balls? What happened to them. This wine has body for it is no rose but the high acidity will slightly mind boggle you because it feels like a red too. Elisabetta was given lemons and she made the most extraordinary Lezer.

Another Pull the Cork blinder is this:

You know when you don’t know if you really want to drink wine because you feel a bit heavy? I literally only feel like this if I’m hungover. But you know what I mean, when you’re considering a gin & tonic instead because your brain isn’t going to do the wine justice. Well, next time you’re feeling a bit bleugh you might want to try this Gruner Veltliner.

This was my first Falanghina wine. Another treasure from the Jackson & Seddon trove. From Sannio in Campania, this is another very interesting, different wine. Tasting notes: This beautiful white from Italy is so perfectly balanced. The citrus notes you’d expect when walking through a grove of lemon trees, rather than that sort of zesty scent and texture. It’s slightly creamy, a little oaked, all the lovely things in exemplary moderation.

And now for something so totally confusing…a Riesling from Italy. Really mindbogglingly delicious and not a clue on the label to the untrained eye. 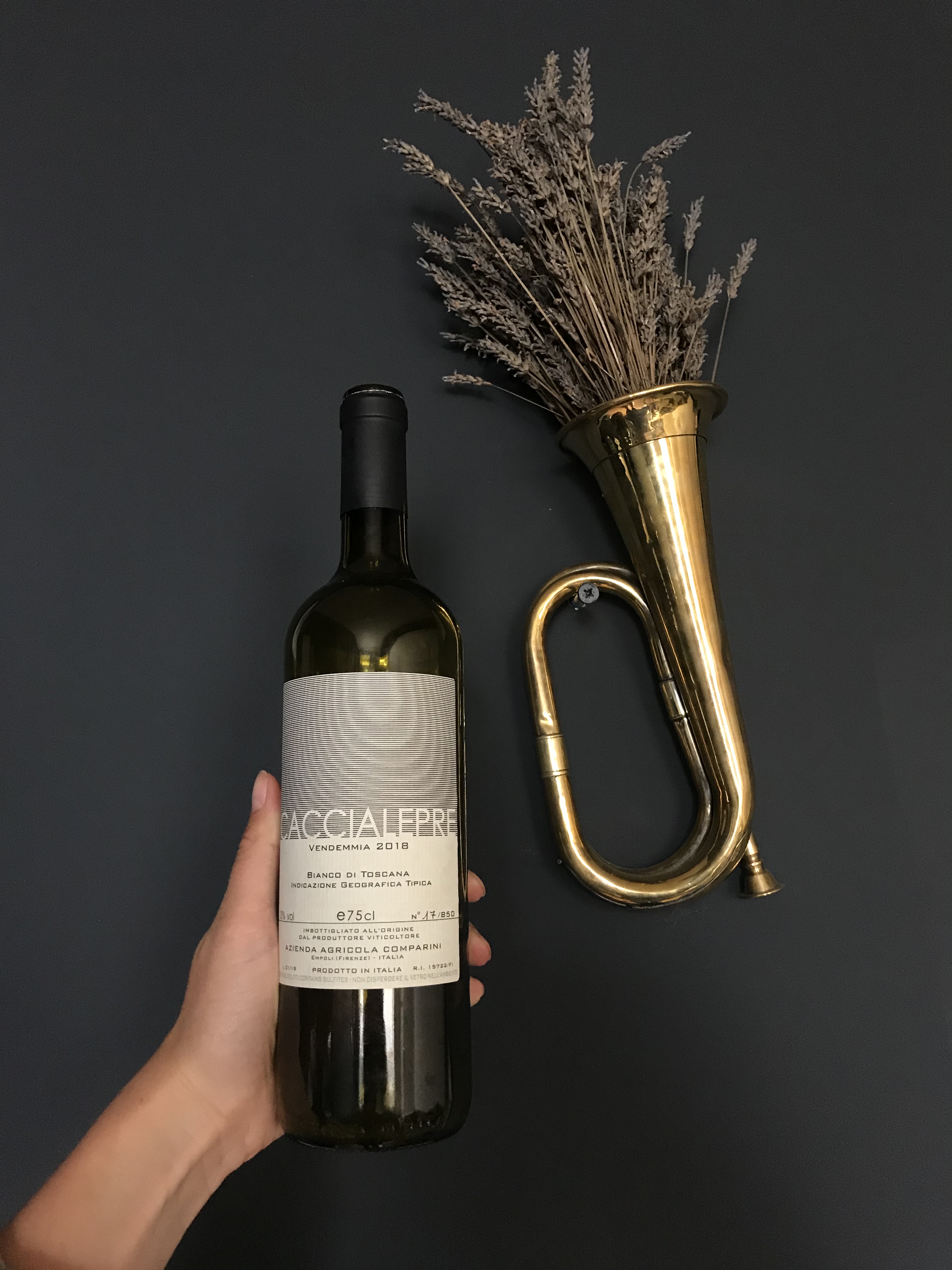 Let me just begin by saying, the length on this wine. If caudalie’s meant a wine won this wine won by lengths. It just goes on and on and on, and it’s Italian and it shouldn’t be like this should it? The producer took the vineyard on to produce very small scale interesting wines, and they have managed to really successfully. This bottle is 17 out of 850 and having that on the bottle is a really nice touch too. It’s a 14 hectare estate that the producer sort of salvaged after it was left inhabited for some time. The vineyards themselves were replaced in 1999 and they’re now producing Chardonnay, Sangiovese, Riesling, Cabernet Sauvignon and Merlot.

This isn’t our winemakers full-time job, they are an agronomist by trade, this is almost like a hobby but a serious one at that. This wine, part Riesling, part Chardonnay is called Caccialepre which is the name of a herbaceous plant that translates to hare-hunter. This type of grass used to be used to attract hares, it grows spontaneously in the vineyards and over the land surrounding the vineyards.

Tasting notes: My oh my, the colour to begin with is intense, honey golden and shiny, almost slick. Typical punch you in the face Riesling notes on the nose, it’s certainly not trying to be anything else. A bit of petrol, grapefruit and the Chardonnay gives it this whacky acidity that is just so moreish. It only makes sense that when you combine two of possibly the greatest grapes on this earth (that’s dramatic isn’t it) you get this mega wine. I can’t find it anywhere else but it’s around the £20 region from Jackson & Seddon, an independent wine trader. 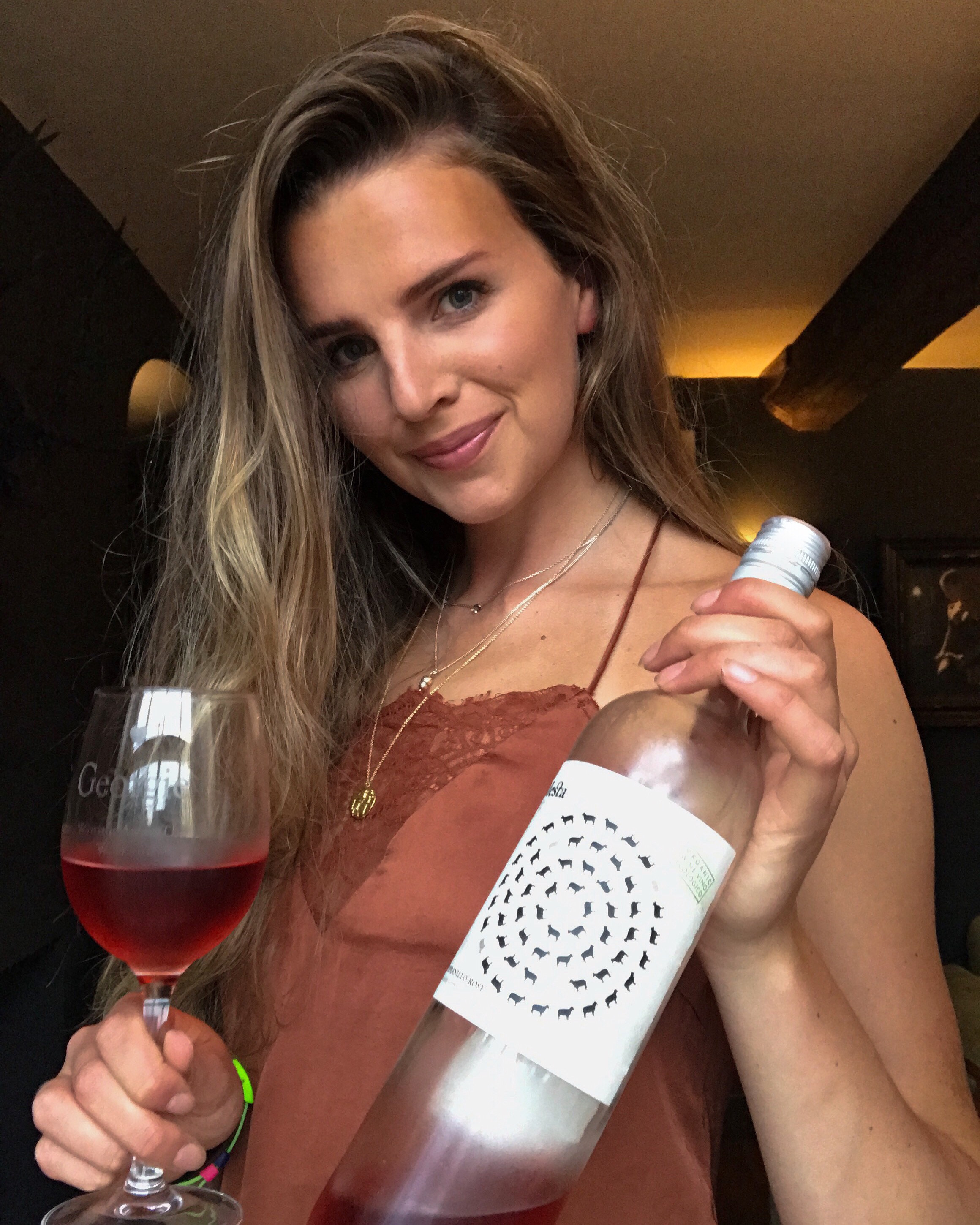 I have had this rose in my wine rack for some time. Even I’m shocked it lasted so long. There was also a brief interval where it lived in my car but I couldn’t bring myself to actually exchange it as a gift.

It’s from The Old Bridge in Huntingdon. “100% Tempranillo fermented cool like a white wine (after pressing from the skins early, when enough colour is extracted. The residual sugar level is 7.5 grammes per litre; which is only just above the ‘threshold of taste’).” Tasting notes: A mysterious wine, it wants body but it wants barely there tannins too. Strangely delicate for its colour, peppery, notes of cherry smells like a sexy French man but maybe my mind is still in Paris. Beautifully crisp and off-dry, do not judge by it’s colour rose snobs.

That should keep you going…

While I hope you’re busy stocking your cellars, sideboards and fridges up, take note that I think only one of the wines I mentioned is produced by a male winemaker, told you it was all bollocks.

Finally I leave you with this quote from The Decanter. A day in the life of Mark Williamson which I only found after I’d written this blog, it seems he’s doing just what he set out to do.

‘There is no point in pushing people to try something they may not want. Happily the French no longer have the rigid notion that they must drink French. It is the American tourist who persists in being “plus royaliste que le roi” and drinking French when in Paris. At the end of the day, though, it makes me happy to see empty bottles reflecting a diverse choice of wine.’

Read more at The Decanter

One thought on “Try Something Different”