“Unless you are good at guessing, it is not much use being a detective.”
Agatha Christie

I wish I’d cooked this evening. If I had, it would be my absolute favourite duck dish inspired by Ross’ Mum to pair with the beautiful Chateau Montus 2011 I am currently drinking. I’ve written about the Tannat grape before if you’re interested but the clue is in the name, a big tannic meaty wine, chewy but deliciously swallowable too.

I chose this particular wine as I’ve been trying to figure out how to write about the man behind it. Not the maker, but in this instance, the educator or purchaser I suppose you could say. Frederic Massey got in touch with me many moons ago regarding my blog. One of my first ever posts was about a mysterious Swiss wine and Frederic contacted me via Twitter having cracked the code.

Frederic continued to support my blog and encourage me to keep writing it despite sometimes being in jobs where I truly was lacking all inspiration. However, it wasn’t until a few weeks ago that we actually met in person at The George in Stamford.

The South West of France is where Frederic was born and so where his wine knowledge first took root. I have since tasted some Madiran wines such as Tannat and then moving slightly East, Frederic introduced me to the lesser-known region of Bandol too. Having read my blogs over the past few years, Frederic knew all about my mad life so I was keen to hear all about his. We spoke of his upbringing and holidays to Bordeaux and Burgundy. How much these places have changed to keep up with tourism and how I desperately need to visit!

And yet, despite their beauty, they couldn’t hold onto Frederic for long. He’s been part of the UK for many years now and lots of his wine knowledge has come hand in hand with, somewhat surprisingly, a career in finance. While wining and dining clients over the years Frederic has been fortunate enough to meet some of the most prestigious people in the industry. Wine tastings at Clive Coates MW’s home, pre-auction tastings at Christie’s and lots and lots of fantastic restaurants that are doing magnificent things with their wine lists. I was doing my best not to sit there drooling and what was going to be just a wine tasting quickly developed into supper for two.

We started with Pol Roger, a champagne that carries some huge historical significance and like many of the champagne houses, a few inspiring women. I still love reading about Odette Pol-Roger and her relationship with Sir Winston Churchill. I’ll never forget reading this quote in The Telegraph’s obituary:

There was little that could distract her from the chance of a fine catch. “The other night,” she told The Daily Telegraph in 1970, “I was in Paris, dining at the Embassy with Christopher Soames, and afterwards I got into my car and drove to Normandy.

“As the sun was coming up I was thinking of getting a bit of sleep when I looked down from my bedroom window and saw a huge trout in the stream which runs through the property. So I grabbed my rod and rushed down and caught him – still in my dinner gown. Well! Life must be enjoyed, no?”

Life must certainly be enjoyed, and as the bubbles went down, Frederic began to get excited about his pre-planned wine choices. I hoped just as much as he did that The George’s website was up-to-date and they would have them tucked away in their cellar still. Thankfully, we were in luck and like two children in a toy store we waited in anticipation for the first wine to arrive.

We started with Bordeaux, a 2005 Chateau Talbot, St. Julien which I have found has the most interesting history after a little research. The vineyard in France, used to belong to John Talbot, Earl of Shrewsbury. The Earl was most feared in France and regarded as a tough, short-tempered and aggressive man. He served in many battles and his men fought in many more but eventually he was defeated and killed on 17th July 1453 at The Battle of Castillon near Bordeaux. With such a great defeat came great victory for the French and it enabled the vineyards to slip back into French control after belonging to the British Crown for over 340 years.

“Such was the end of this famous and renowned English leader who for so long had been one of the most formidable thorns in the side of the French, who regarded him with terror and dismay” – Matthew d’Escourcy

Chateau Talbot is one of the largest estates in the Medoc and its 102 hectare single vineyard is situated inland from the Gironde River and west of the hamlet of St-Julien-Beychevelle.

The 2005 Chateau Talbot is a Cabernet Sauvignon blend and the vineyard’s wines are Quatrieme Cru Classe which means fourth growth in very simple terms. They are very well-regarded, consistently good wines and now that I have appreciated the 2005, I shall be on the look out for more.

So what did we think? Well the service was quite startling to begin with. The waiter appeared with the wine and we requested a decanter so he vanished again, with the wine. Upon his return he dramatically poured the wine into the decanter and then bizarrely (in my opinion) began to warm it over a candle he’d lit on the table. He ever so delicately sort of swirled the wine over the candle for several seconds then he’d dive nose first into the top of the decanter to see if it had opened up…

It was all a little unnecessary but entertaining nonetheless. Chateau Talbot wines are renowned for being just as enjoyable young as they are having aged for in this instance, 14 years. What staggered me the most was how much the wine evolved with the room. From faintly tannin heavy to none at all back to dry at the finish, no sip was ever particularly the same. Ripe raspberry notes shone through frequently but occasionally these were overwhelmed by something more like vanilla. The silky texture stayed true throughout and this wine was beautiful on the nose, very well-balanced and refreshing. 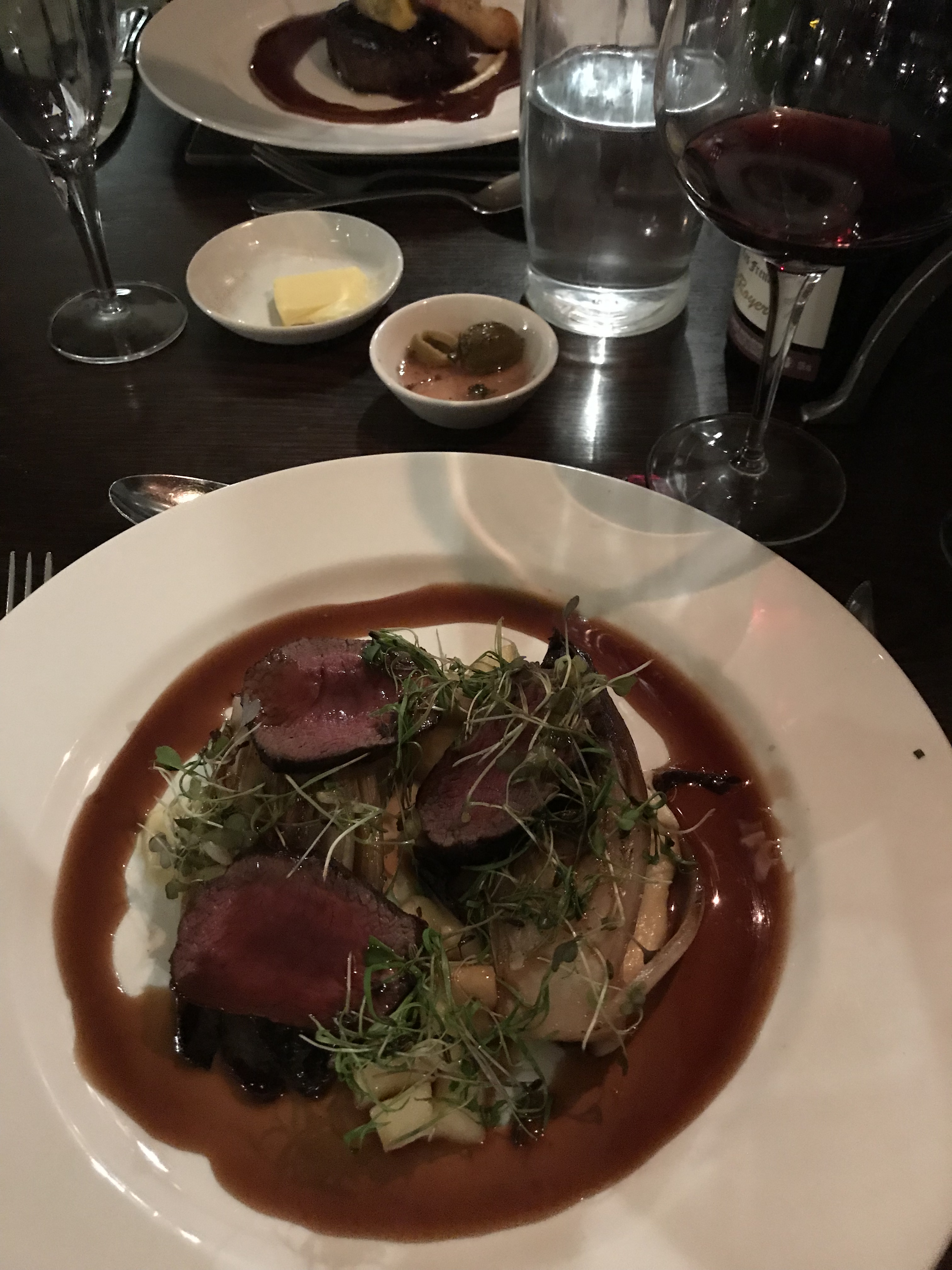 Next, we decided to compare the Bordeaux to a Burgundy to go alongside my choice of venison and Frederic’s fillet steak. The service in The George dining room is always faultless and we were presented with Burgundy glasses for full effect, no candle this time. Frederic chose the 2013 Chambolle-Musigny, Vielles Vignes, Le Digioia-Royer. This wine had much more attack that the Bordeaux which I suppose, was to be expected. I preferred the velvety easiness of the first wine but with beautifully pink venison, the Chambolle-Musigny wasn’t far from perfect. Frederic is a huge Pinot Noir fan so this was more his bag. I think if anything, my taste buds were reeling from the delicious food and wine, what a shock for a Sunday evening! 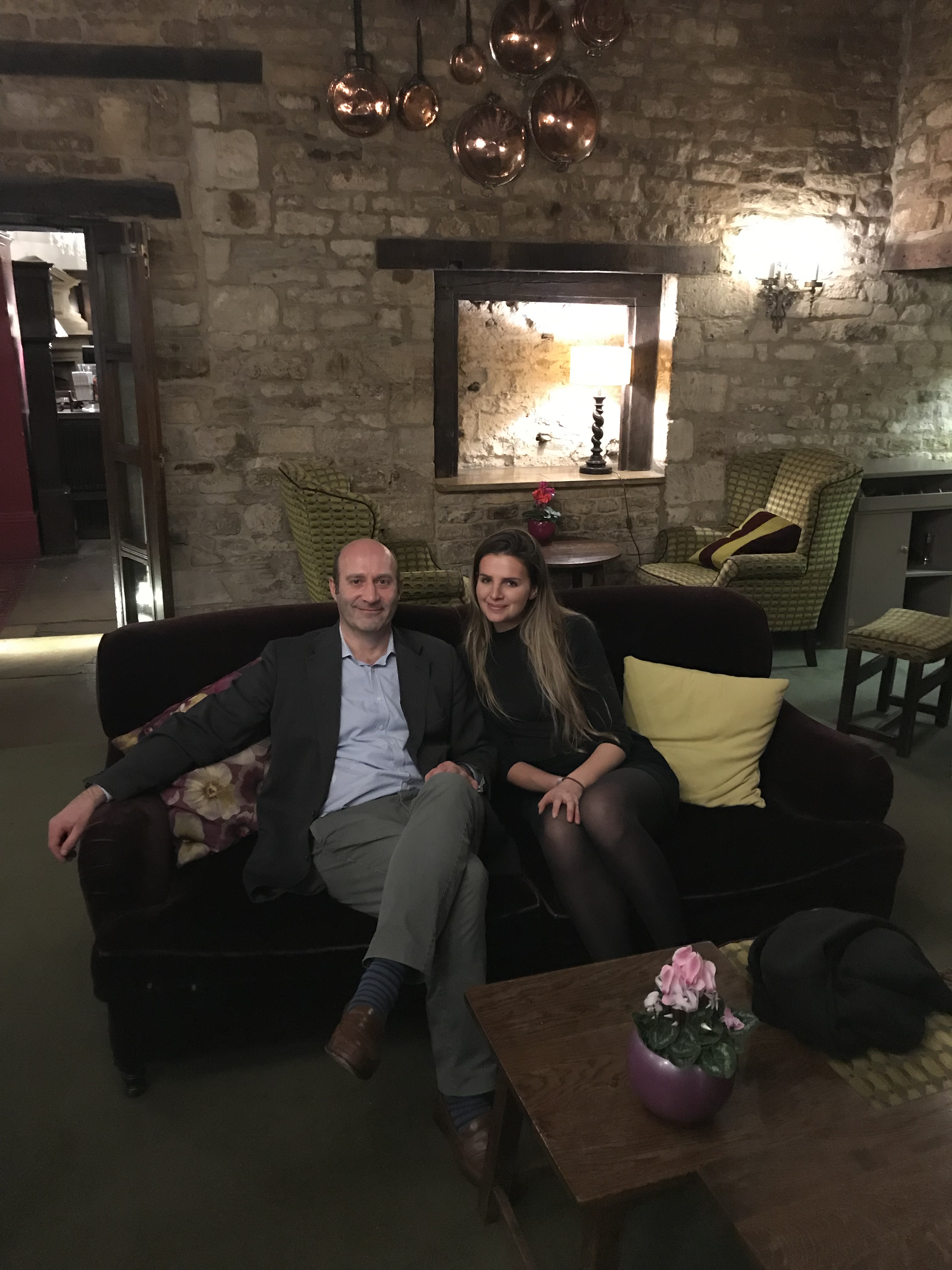 From the start to the finish of our evening, it proves that there is life and so much more in wine. It was my blog and Twitter, that passion for wine, that got us talking all the way to The George in the end, what mysteries this delicious nectar creates. I’ve since booked my next set of WSET exams, I’ve been perhaps foolishly declining full-time job offers and I’m wholeheartedly set on this summer being the one that I go on a tour de all vineyards I can get myself to, it’s time to trust my ever suffering gut.