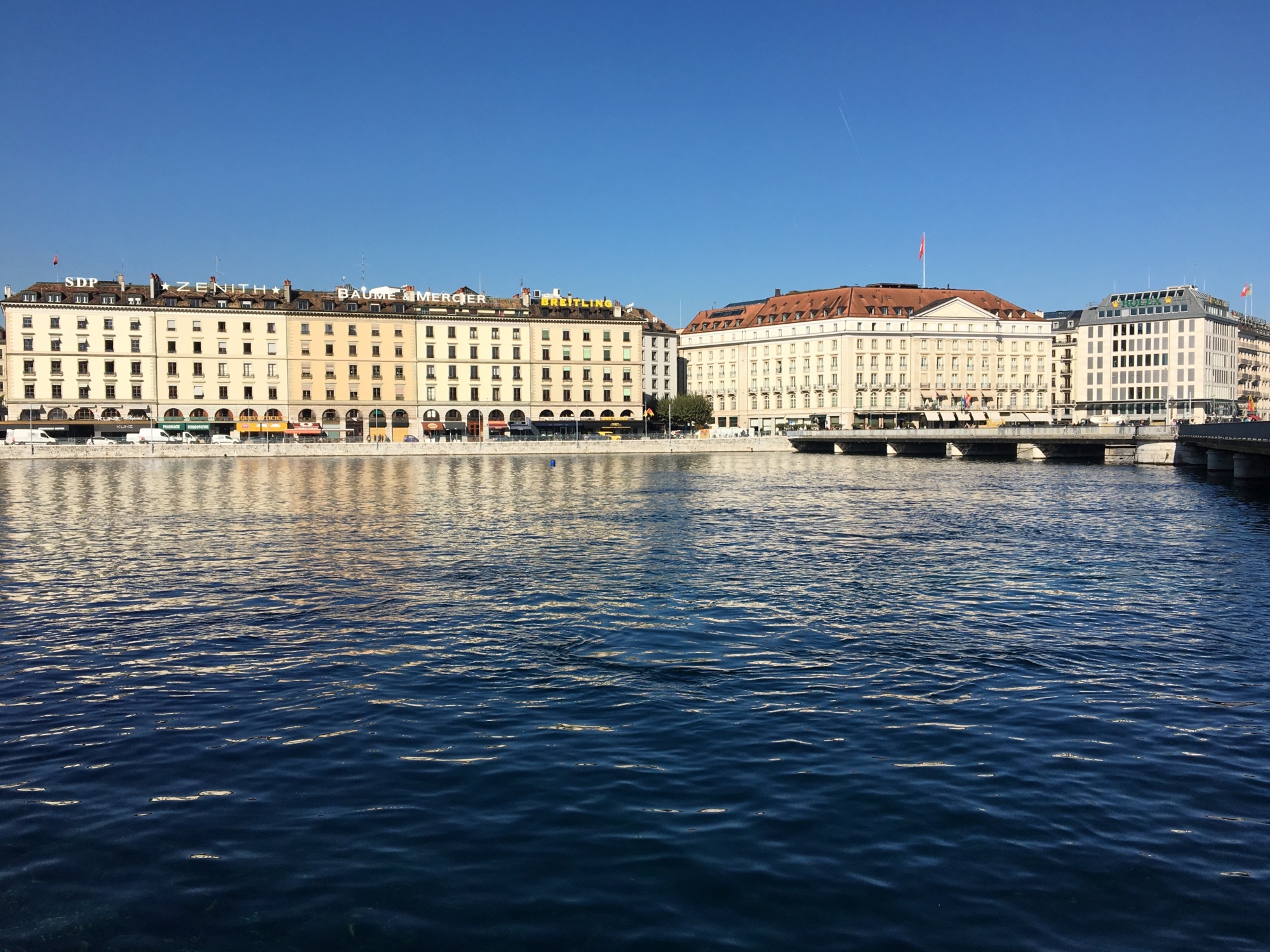 Well isn’t that a first, I managed to get through a Tuesday without bashing out a tirade of abuse on the keyboard, things are looking up.

Now that I have fully recovered from the booziness of my little skiing jaunt over the weekend, I feel ready to tell you all about Swiss wine, glorious, glorious, Swiss wine.

As you may have noticed, supermarkets and wine merchants tend to be lacking in Swiss wines. We can blame this on the terrible exchange rate and the stubborn Swiss franc if you like. Or we can blame it on the fact consumers don’t really want to spend that much on wine…or we could say they’re being greedy and keeping all the good stuff for themselves. Whatever the reasons, to experience the beauty of the wine you really just need to pop to Geneva, it’s a beautiful city by bike as you can see from the photos.

Well, a lovely chap called Frederic Massey got in touch via Twitter to let me know that the wine I was after could in fact be from the Valais region and mix Pinot Noir (2/3) and Gamay grapes (1/3) and possibly I had a “Dole” appellation…which are the best of those blends.

Harriet and I headed for Geneva with one thing in mind, we must find this wine. That’s about as much planning as we did really and upon arrival, we spontaneously hired bicycles and set off rather wobbly on our mission.

A few horn beeps and painful curbs later we found a buzzing burger bar near the centre that was full of gorgeous people on their lunch break. Side note: Why are Swiss people so attractive?! The wine list was very basic and as it was past 12pm we both had a large glass of the Gamay, hoping that Frederic Massey was onto something.

As you can see from Harriet’s joyous expression, we’d found the wine. It was delicious and great value. The burgers were served rare, juicy and fresh and the whole experience really was very pleasant.

As it turns out, Gamay is the main sort of house wine that you can get in Switzerland, but they all vary greatly. Going back to what Frederick said it’s clearly important that they’re blended with the Pinot Noir to add that certain je ne sais quoi.

Now we were on a mission to find the older side of Geneva that we could remember from out previous trip. After a quick Google we realised we were actually the wrong side of the river, which meant a very picturesque bike ride along the bank to get to the bridge.

After a quick stop off in Tiffany’s we were on our way, cobbled streets in sight and noses tingling in the sunshine that we were gifted with that day. It got jolly hilly and I am embarrassed to say I had to dismount whereas Harry just pushed on up and around the historic corners of the city. It’s beautiful by bike, and you can get through all the same alleyways you’d go through by foot.

Hearts hammering and lungs bursting, we’d found Old Town Geneva and questioning whether more wine was the answer, we sat down at the quirky Cafe-Creperie Saint-Pierre and ordered a carafe of more Gamay.

See, Geneva is pretty isn’t it. Now this is where I falter slightly, is it the wine that is divine or is it the setting? I recently read something somewhere about how much of wines wonder and beauty lies in the way we experience it and thought, that’s perfect, I’ll have that. I also read something about how once you start drinking alone you’re an alcoholic so I stopped reading at that point.

“How much of wines wonder and beauty lies in the way we experience it.”

I digress, and this Gamay, again from a very simple wine menu and the language barriers were too high for me to ask to see the bottle/I was too busy sunbathing, wasn’t up there with the first but was still very drinkable. It had those strong notes of what I call cider but I think it means it’s low in sulphites and quite young. It’s a very very fruity wine, possibly best to pair with a juicy rare burger.

Gently tanned and watered we set off once more for the original hang out – Denise’s Burger Bar. It didn’t take us long to find a bustling Globus (the shopping centre) and you could just see Denise’s peering out from around the corner.

We found a place to secure our bikes next to a charming butchers selling everything from Woodcock to Pheasant which absolutely delighted me. It puzzles me back at home at the sheer lack of game on local pub’s menus. It’s barbaric really. Where I’m from we are surrounded by countryside, good quality shoots and I’m sure plenty of people shoot the odd bunny or two but can you get rabbit at a restaurant, not on your nelly, you’ll be doing well to get venison. Is it because people don’t eat it I wonder?

I digress, again, we’re in Globus now, the most extravagant shopping centre in Geneva, we have found our favourite burger bar. Sadly, we’re still full from the previous restaurant, perhaps I shouldn’t have dismounted so many times, so settle for just more wine.

I opt for the Chapelle de Potensac, Medoc, 2012 which I see you can actually buy online here for £18.99. As you can see, this is a French wine and the different was clear. It doesn’t try to please, it’s too sophisticated and French. A very attractive wine, compact and elegant like a snooty but well-dressed woman. Interestingly it left behind LOADS of sediment, which is nothing to worry about it’s just yeast-grape-tartaric acid sediment… 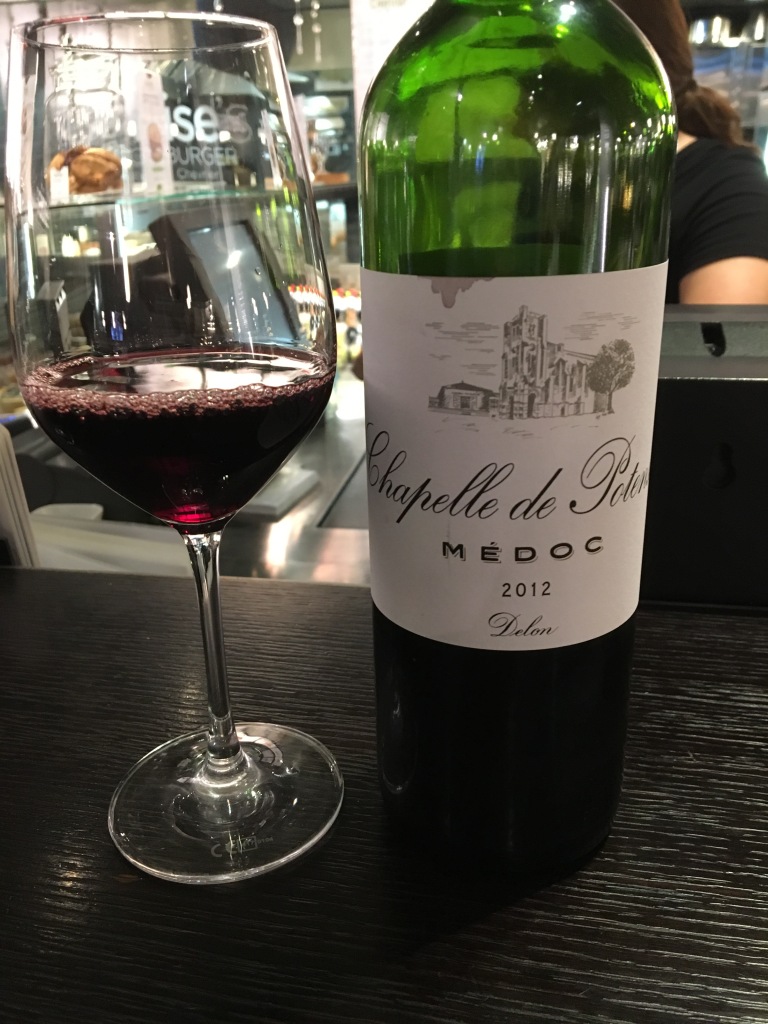 Where are we now, we’re in Tignes and one of the only open restaurants, L’Escale Blanche has served me up a blooming fantastic plate of Carpaccio with Savoie Rouge…I chose a bottle (I shared it) of the Gamay Vieilles Vignes, Carrel. This was a great wine, I was so thirsty it just vanished so we had to have some more. It looks like it’s achieved itself a cheeky award too:

Next up was the fatal Perrier Jouet on the slopes which you will have seen already…if not it’s here along with my frozen cheeks.

And then to warm ourselves up we headed to the beautiful restaurant at the top of Tignes Glacier, Le Panoramic, and got involved with a barrel of Merlot which was your standard, fruity, hits the spot Merlot. 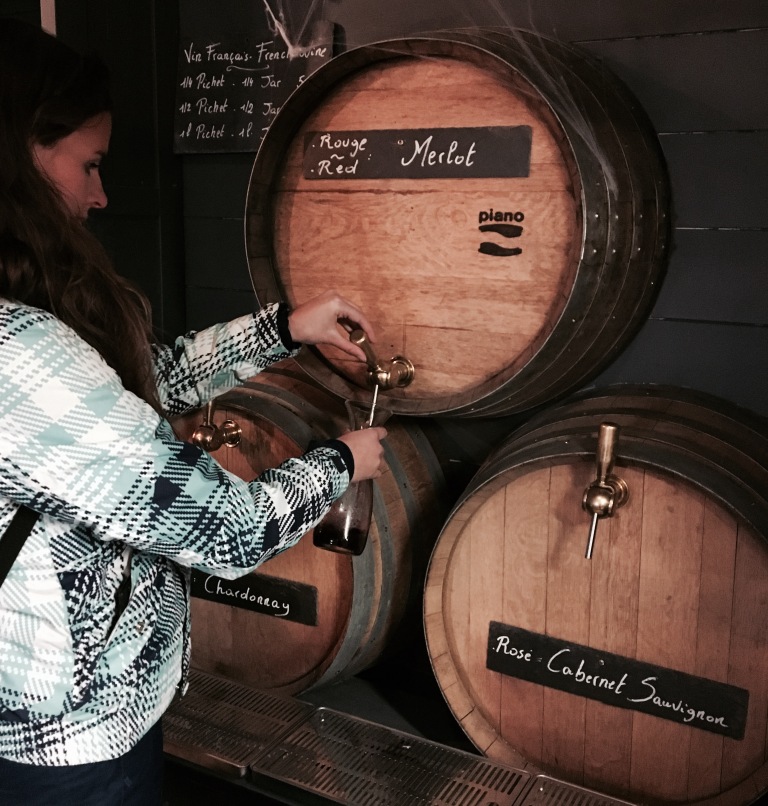 We thought we’d stop there but just before our transfer back, we found ourselves in Coeur des Neiges, a beautiful little hideaway in Tignes le Lac. We scoffed down cheese and accompaniments while we got cosy in their abundance of sheepskin rugs. I had a glass (or two) of the AOP Savoie Gamay, Ruby des Rocailles which was OK but Harriet had a really delicious AOP Graves Bordeaux, from Chateau de Coureau, 2012.

So there you have it, I had a glass of something in the airport too but I won’t bore you with anymore. What I have learnt from this trip is that the Swiss are still producing really good wine and we must all try and drink more of it.